Give us this day, May 6, our daily Elvis

LGBTQ Institute in Germany Was Burned Down by Nazis …

The King Cole Trio charted with “I Can’t See For Lookin’, ” reaching #2 R&B and #24 pop. The trio would have twenty-five hits between 1942 and 1950 before their leader Nat King Cole would permanently go solo.

Joe Liggins & His Honeydrippers came up with one of the biggest hits of the ’40s when “Pink Champagne” charted, intoxicating its listeners to the tune of #1 R&B for thirteen weeks (#30 pop).

Amos Milburn, a Houston, TX, blues artist, charted with “Walking Blues,” reaching #8 R&B. With Milburn it was all or nothing, as he had nineteen straight Top 10 R&B hits, including four #1s from 1948 to 1954. His biggest success was his first charter, “Chicken Shack Blues.”

The Hank Snow All-Star Jamboree show played in Birmingham, Alabama, with Scotty and Bill playing, but without Elvis, who had returned to Memphis for Dixie Locke’s junior prom.

Elvis Presley’s first engagement in Las Vegas ended. During his final show at the New Frontier Hotel Elvis introduced “Blue Suede Shoes” as: “This song here is called ‘Get out of the stables, Grandma, you’re too old to be horsing around'”.

Elvis Presley’s at the Frontier Hotel in Las Vegas 1956

The last episode of “I Love Lucy” aired in prime time on CBS-TV. Iconic because that created the sitcom 3 camera formula and would be the main show when television invented “syndication”, before the home video and internet streaming of content. To Desi, it was about him becoming a star with a whacky red headed wife, to everyone else, it was Movie’s Lucille Ball trying to make her husband famous on a tv show.  She would go on to “Here’s Lucy” series, Vivian Vance would continue and both of her children would appear on the show and later “The Lucy Show”. Desilu Productions would also Produce the first Star Trek series. Desi Arnez, Frank Sintras and all the big band crooners were out of fashion, and have had periodic recurrences – Harry Connick Jr, until he moved from music to movies, and Canada’s Micheal Buble currently.

Elvis reported to the MGM studio He got Clark Gable’s dressing room and the rest of the week was spent with costume fittings, makeup tests and dance rehearsals for Jailhouse Rock U.S. President Dwight D. Eisenhower signed the Civil Rights Act of 1960. Designed to deal with discriminatory practices in America’s segregated South, the act established federal inspection of voter registration rolls and introduced penalties for anyone who obstructed someone’s attempt to vote or register to vote.

Sam Cooke performed at the Howard Theater in Washington, DC, while the Platters were in San Francisco at Fack’s #2 Club. At United Western Recorders in Los Angeles, the Beach Boys began recording “All Summer Long.” All five group members played and sang on the track, which was completed the following day.

In their Clearwater, Florida hotel room, Mick Jagger and Keith Richards worked out the opening guitar riff of ‘(I Can’t Get No) Satisfaction’ following Richard’s purchase of a Gibson fuzz-box earlier that day. The song is considered to be one of the all-time greatest rock songs ever recorded. In 2004 Rolling Stone magazine placed ‘Satisfaction’ in the second spot on its list of The 500 Greatest Songs of All Time.

At Criteria Studios in Miami, James Brown recorded “I Got You (I Feel Good),” a reworking of “I Found You” recorded by Yvonne Fair three years earlier.

Working at Abbey Road studios in London, The Beatles recorded overdubs on ‘I’m Only Sleeping’ and worked on various mixes of the track. The song features the then-unique sound of a reversed guitar duet played by Harrison who perfected the part with the tape running backwards so that, when reversed, it would fit the dreamlike mood.

Pearls Before Swine begin recording an album called “One Nation Underground”. The LP includes a song called “Miss Morse”, which would be banned in New York when it was discovered that lead singer Tom Rapp was singing F-U-C-K in Morse code. After disc jockey Murray The K played the record on the air, local Boy Scouts correctly interpreted the chorus and phoned in a complaint.

Two weeks after being pushed out of the top spot on the Cashbox Best Sellers list by The Monkees’ “A Little Bit Me, A Little Bit You”, Nancy and Frank Sinatra return to number one with “Something Stupid”.

At EMI’s Abbey Road Studios in London, the Beatles recorded 36 takes of “You Never Give Me Your Money.” Paul McCartney later overdubbed the lead vocal onto take 30 and added more vocals and chimes.

Ike and Tina Turner receive their only Gold record for their version of “Proud Mary”, which climbed to #4 in the US.

Paul Simon’s first solo tour began with a performance at the Music Hall in Boston. Recordings from the tour were later released on the 1974 album, “Live Rhymin'”. Former partner Art Garfunkel would release his first solo album, “Angel Clare” and the single “All I Know” later in the year.

Elvis did Dinner and Midnight Shows at Lake Tahoe

During this show, Elvis talked to the audience about the catastrophe of the recent hurricane and the subsequent victims in McCombe.

Led Zeppelin broke their own concert attendance record at a show in Michigan, when more than 76,000 fans saw their performance.

Elvis invited US impressionist, Douglas Roy to the stage during this show.

Back home in Memphis Elvis spent most of the next 2 weeks upstairs at Graceland.

The soundtrack to Saturday Night Fever started an 18 week run at No.1 on the UK album chart, also No.1 in the US. The album, which features seven Bee Gees songs, went on to sell over 30 million copies worldwide.

Former manager of The Bay City Rollers Tam Paton, was convicted on a charge of gross indecency with boys and was sentenced to three years in jail.

Tina Turner‘s “What’s Love Got to Do With It” is released. The song would eventually climb to number one, win Grammys for record and song of the year and established Turner as a major solo star. When Tina left her husband and former band mate Ike Turner in 1975, she was carrying nothing more than thirty-six cents in change and a gas station credit card.

Whitney Houston performed on her first network TV special, Whitney Houston—This Is My Life, on ABC-TV. The show was produced by her own Nippy Inc. production company. Nippy was her  childhood nickname.

Actress  Marlene Dietrich died of kidney failure at age 90. (Witness for the Prosecution, The Blue Angel, Judgment at Nuremberg, Destry Rides Again, Around the World in Eighty Days, A Foreign Affair, Pittsburgh, Kismet, Desire, The Devil Is a Woman, Touch of Evil, Blonde Venus)/singer (Falling In Love Again)

Agents of the U.S. Internal Revenue Service raided Jerry Lee Lewis’ home in Nesbit, Mississippi, and hauled away his belongings in an attempt to make up for what it said were $1.6 million in back taxes.

Oasis scored their first UK No.1 single when ‘Some Might Say’ went to the top of the UK charts. It was the first single to be released from the Manchester bands second album ‘(What’s the Story) Morning Glory?’ And the last Oasis track to feature original drummer Tony McCarroll.

Rock and Roll Hall of Fame at their twelfth annual ceremonies. The event was held at the hall’s Cleveland home for the first time.  inducted:

The Guinness Hit Singles book listed “Bohemian Rhapsody” by Queen as the UK’s favorite single of all time, followed by “Imagine” by John Lennon, “Hey Jude” by The Beatles, “Dancing Queen” by ABBA and “Like A Prayer” by Madonna.

Songwriter Otis Blackwell died from a heart attack. Among his hits were “All Shook Up”, “Return To Sender”, “Don’t Be Cruel”, “Great Balls Of Fire”, “Fever” and “Handy Man”. Over the years, Blackwell’s songs have sold more than 185 million copies. Otis Blackwell had also written under the name John Davenport.

Otis Blackwell, 70; Wrote Hits for Presley and Others – The New York

After the controversy regarding Dixie Chicks member Natalie Maines’ comments about President George W. Bush and the Iraq war, a Colorado radio station suspended two of its disc jockeys for playing music by Dixie Chicks.

US coffee shop chain Starbucks banned the sale of Bruce Springsteen’S latest album Devils and Dust over concerns about its adult content. The retailer – which stocked CDs at its branches in the US – said it would be promoting other albums instead.

Nancy Sinatra unveiled her star on the Hollywood Walk Of Fame as she celebrated forty years in music since the debut of her 1966 hit “These Boots Are Made for Walkin”.

Cher returned to the stage at the Las Vegas Coliseum for the first of 200 planned shows, however only 78 of the them were performed.

The results of the evolution of western pop music, spanning from 1960 to 2010, was published in The Royal Society Open Science Journal. The scientists who looked at more than 17,000 songs found three music revolutions – in 1964, 1983 and 1991. In 1964 the invasion of British bands introduced a radical new rocky sound. Synthesisers, samplers and drum machines, drove a second major style shift in 1983. The third, in 1991, came about when rap and hip-hop went mainstream. The team also refuted claims that pop music was starting to sound the same.

Stevie Wonder closed out a public memorial for Prince with a performance of “Purple Rain” in front of several thousand fans in Los Angeles.

All shook up over Elvis 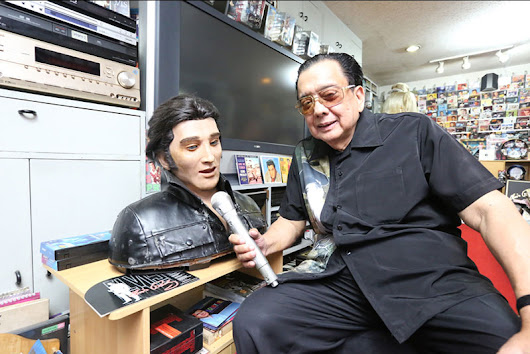