Pat Boone’s version of Ivory Joe Hunter’s 1950 hit, “I Almost Lost My Mind”, topped the Cashbox Best Sellers list. Over the years, nearly 50 other artists have recorded the song.

Elvis remained in Biloxi for most of July.

The Quarrymen, featuring John Lennon, Paul McCartney, George Harrison, John “Duff” Lowe on piano and Colin Hanton on drums, recorded a vanity disc at a small studio in an electronics shop owned by a man named Percy Phillips. The band recorded ‘That’ll Be The Day’ and ‘In Spite Of Danger’ in one take each. With the names of the tunes and the song’s writers hand written on the label, each band member was to keep the 10-inch 78 rpm disc for a week before passing it on. Both recordings eventually ended up on Anthology 1.

The Presleys live in  a rented house off base with his parents, his grandmother Minnie, cousins Gene and Junior Smith, and friend Lamar Fike.

Billboard magazine reports that the teenage dance craze, The Twist, is being picked up by the adult crowd in Philadelphia.

The Beatles played their first ever gig in Wales when they appeared at The Regent Dansette in Rhyl. Tickets cost five shillings, ($0.70).

Bobby Vinton‘s “Roses Are Red” sat on top of both the Billboard Hot 100 and the Cashbox Best Sellers list. It was a song that Bobby found in a pile of demo discs that were marked “reject” at Epic Records. The label was about to drop Vinton’s band, but he talked them into recording him as a solo artist. The single became a million seller and was both Bobby’s and Epic’s first Gold record. It made #15 in the UK.

The film’s cast and crew of Viva Las Vegas traveled to Las Vegas where they stayed at the Sahara Hotel.

Herman’s Hermits toured the USA with opening act The Who  on 55 dates.

David Bowie released the single ‘Love You Till Tuesday’ which failed to reach the charts. Bowie’s 1969 showpiece film Love You till Tuesday took its name from the song, which also featured over the opening credits.

Bob Dylan makes a surprise appearance with The Band at the Mississippi River Rock Festival, where he performs three numbers.

During this period Elvis spoke with almost every musician he knew about accompanying him to Las Vegas.

Rehearsals for the upcoming show in Las Vegas were held at MGM’s studio in Culver City and were filmed for use in the documentary that could be titled That’s The Way It Is. 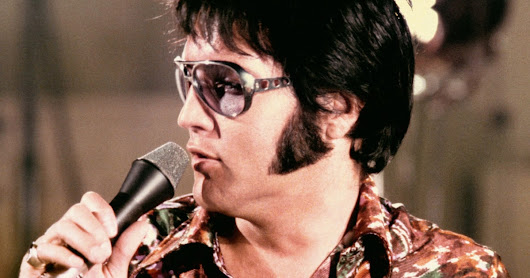 Elvis went to Tahoe for rehearsals. Elvis was back in Los Angeles where he remained until the 20th.

During a concert at the John Wayne Theatre in Hollywood, California, Phil Everly smashed his guitar and stormed of stage, Don finished the set by himself and announced that The Everly Brothers had split. This was the last that the duo performed together for nearly ten years.

Elvis remained in Memphis for the rest of the month,

Elvis performed at the Civic Center, Springfield, Massachusetts, where Elvis threw his guitar into the crowd.

Elvis flew on to Las Vegas with Linda, where he once again put himself under Dr. Ghanem’s care.

Elvis Costello and The Attractions made their live debut supporting Wayne County at The Garden, Penzance, Cornwall, England.

Elvis upstairs at Graceland to the balance of the month

Allen Klein, the man who had managed both The Beatles and The Rolling Stones, began a two month jail sentence for falsifying income tax documents. For years Klein had control over ABKCO (Allen and Betty Klein Company) Music and Records and was responsible for the lack of CD releases by such artists as Chubby Checker, Bobby Rydell, The Rays, The Dovells and many others from the 1960s.

Michael Jackson gave himself a place in the Guinness Book of World Records for setting a new attendance record, when he played the first of seven nights at Wembley Stadium in London. The shows on his Bad World Tour were attended by a total of 504,000 fans beating the record previously held by Genesis, with four sold out nights. Among entertainers in the audience were Diana Ross, Boy George and Terence Trent D’Arby.

At the height of “Elvis is Alive” phenomenon, Nashville radio station WYHY offered $1 million to anyone who showed up at the studios with proof that Elvis Presley was still alive.

At The Peach Festival, South Carolina, 432 guitarist’s broke the world record for the most guitar players appearing in unison for the longest period of time, when they performed ‘Louie Louie’ for 30 minutes.

Tom Jones lost a paternity suit and was ordered to pay $200 a week in child support to 27 year old Katherine Berkery of New York. The judge in the case was Judge Judy Sheindlin, who was still serving in her 15 year tenure as a New York Family Court judge before appearing in her court TV show, Judge Judy.

Olivia Newton-John discloses that she has breast cancer. She was later deemed fully recovered until 2018.

Walkers Spice Girls crisps went on sale in the UK, over 16 million bags were sold by the end of the year.

Lisa Marie Presley performed her new single “Sinking In” on the “Late Show with David Letterman.”

A pair of glasses worn by former Beatle John Lennon sparked a bidding war after being offered for sale online. The circular sunglasses were worn by Lennon during The Beatles 1966 tour of Japan, where the band played some of their last ever live dates. Anonymous rival bidders had pushed the price as high as £750,000 at online auction house 991.com.

Michael Jackson fans from all over the world congregated at London’s O2 arena, where the star had been due to begin his run of 50 concerts. Fans who left messages to a wall of tributes and conducted Jackson sing-a-longs, held a minute’s silence at 1830 BST to mark the time when the doors to the concert would have opened.

The 50 show at the Oz, planned for over 6 months sold out immediately online a ticker seller sold to their own subsidary ticket resellers, whereas, Elvis’ 1969 return to performing in Vegas was 53 sold out shows over a few weeks. Jackson’s LA memorial concert also saw most seeking ticket for re-sale and the expected crowds did not materialize and the city of LA was left with a huge police security expense.

Members of a Michael Jackson fan club reached out to officials at Forest Lawn Cemetery in Glendale, California, offering to clean up the King of Pop’s vandalized tomb which had been defaced with permanent ink tributes.

Speaking to fans at a show in Quebec City, Canada, Stevie Wonder vowed that he would never again perform in Florida or any of the other 22 states that carry the controversial “Stand Your Ground” law following the acquittal of Neighborhood Watch volunteer George Zimmerman, the man who gunned down teenager Trayvon Martin.

Elvis Presley shook up the Springfield Civic Center 40 years ago

The Las Vegas coroner’s office confirmed that B.B. King died of natural causes primarily stemming from Alzheimer’s disease and was not murdered. Two of his daughters had alleged King was poisoned by long-time associates.

Dave Somerville, lead singer for The Diamonds, died of cancer at the age of 81. The Canadian quartet charted sixteen times on Billboard’s various charts in the late 1950s and early 1960s, including the Top 10 hits “Little Darlin’”, “Silhouettes” and “The Stroll”

The Elvis Aliver Conspiracy Won’t End: The AP reported on July 14, 2017, that a story claiming a dead homeless man

Elvis: The Concert Years HAS BEEN RESCHEDULED TO July 14th

The Rolling Stones were at No.1 on the UK singles chart with ‘It’s All Over Now’, the group’s first of 8 UK No.1’s. Written by Bobby Womack and Shirley Womack, it was first released by The Valentinos featuring Bobby Womack in the same year.

Never Ending was recorded in 1963 and was first released on this single, and then as an LP filler track for the Double Trouble soundtrack LP, it failed to make the top 100, peaking at 111.